Clinical Director of Cohen Cosmetic And Emergency Denture Clinics Eugene M. Cohen, DD, F.C.A.D. had earned an undergraduate degree as a Marine/Navy Radar Systems Engineer in 1973. Shortly after he has served 2 years in the Navy as a LT(N) Team Leader. 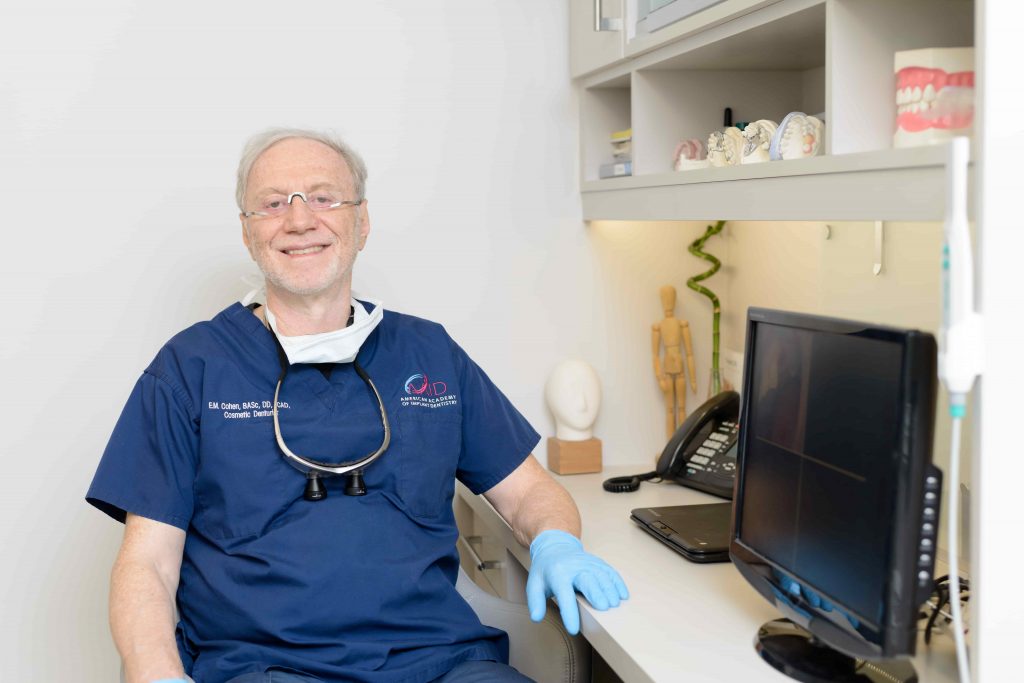 He is a graduate of the prestigious Faculty of Denturism, School Of Dental Health in Toronto, Canada, where he received first-rate dental clinical and technological training in all aspects of General, Cosmetic and Emergency Denturism.

Having achieved certain high standards of experience and expertise in the practice of Denturism he was duly appointed a Fellow Of The Canadian Academy Of Denturism in March 21, 1994. With all the rights and obligations appurtenant thereto including the use after his name the designation F.C.A.D.

Between 1995 and 1999, he studied core legal subjects at the University Of London, Law School, U.K., swatting for his exams in the advanced external LL.B program.

Through a combination of state of the art technology, sensible treatment plans and genuine devotion to the unique needs of each patient, this Denture Specialist preserves healthy teeth and gums, alleviates oral discomfort and improves the appearance of smiles on a daily basis. He has applied his unique blend of artistic and technical skills to produce durable and aesthetic results in thousands of patients. A fully licensed and certified by CDO Denturist with a grasp of the most innovative non-invasive new cosmetic denture procedures, he is dedicated to lifelong learning through continuing education courses. He has special interest, skill, and knowledge about design, fabrication and fitting of Flexible Partial Dentures and Short Span Removable Flexible Bridges.

He has had invented several new dental clinical and technological procedures. He has written numerous clinical articles in peer reviewed dental publications.

Eugene M. Cohen, DD, F.C.A.D. is licensed and certified to practice Denturism by the College of Denturists of Ontario (CDO) since 1982. He is a former long standing consultant on Denturism to North York Hospital and is a past and present member of the following professional groups:

We respect your privacy. We will not willfully disclose any individually identifiable information about you to any third party without first receiving your permission, as explained in this privacy statement. Furthermore, we do not specifically target children under the age of 16, nor do we knowingly collect, without parental consent, individually identifiable information from such children.

What Information Do We Collect?

By using our site or services, you consent to the use of your information within the scope of Cohen Cosmetic And Emergency Clinics Denture Practice as it has been outlined in this privacy statement. We may decide to change this privacy statement from time to time. If and when we do, we will post the changes on this page so that you are always aware of the information we use.
Effective Sept.15, 2015

Since 1982 the residents of Central Toronto trust Cohen Cosmetic & Emergency Denture Clinic with their smiles.

We are here to help you today!

Get in touch with our team with questions, or book your appointment today!